WHAT DOES HOCKEY MEAN TO YOU? By Sarah Geen

At the Grindstone Award Foundation tournament, recently we were asked to write down “What does hockey mean to you?” Now at the time and under pressure I just jotted down “It is a place I can escape too when life gets too much” but after having some time to reflect on that question I realized how much of an effect it had on me and how much more hockey means to me.

Hockey is the backbone of me figuring out who I am.

When I was a little girl I was a spitfire tomboy always on the go trying to keep up with the boys. My hockey journey started when I was about 6 years old in Novice. I was 1 of 2 girls on the team and by the end of the season after losing every game I decided that hockey was a boy’s sport. WHAT? How did I make that decision at the age of 6 that hockey was a boy’s sport? I decided that figure skating was what girls should do so I dropped hockey and started figure skating and so did the other girl on the team.

Throughout my entire childhood I lived at the rink (If you don’t know the town of Midway, BC. it’s a small rural town with not much else to do) I was by definition of the word a “Rink Rat.” My sister and I figure skated, my brother played hockey, my dad played, coached, refed and was also the local skate sharpening guy and my mom was president of the figure skating club. My family was so involved that my parents even did the fundraising and helped build the local rink as it stands today. Hockey has been a part of me all my life.

As I grew up hockey remained a part of me just never at the forefront where it should have been. After my parents got divorced, I remained a rink rat but again instead of teammate I became “Puck Bunny” or “Water Girl” doing whatever I could to remain a part of the team even if I wasn’t on the ice. This behavior continued into my teen years where I dated hockey players who were not very nice to me and I even pretended to be hurt for our annual Grads Vs. Dads hockey game so I didn’t humiliate myself in front of the boys I so desperately needed to like me as the girl I was supposed to be, instead of the feisty tomboy I was.

I still had this deep sense of not being good enough to play but after becoming a stepmom to 4 girls and having a baby of my own, I needed an escape, somewhere I could forget how hard life really is. I now have 2 boys and a step daughter who play and a 2 1/2-year-old daughter who says she wants to play hockey. I am a coach, a manager, a board member and a passionate hockey parent. I vowed to myself a few years ago even before my daughter was born that I would play a role in some way in the female hockey community so when I found out about the Grindstone Award Tournament I had to be a part of it.

I sent the invite to my local hockey girls in hopes that someone would jump on my bandwagon and come with me but I had no takers. I wavered back and forth that maybe I shouldn’t go because as an introvert I have a hard time putting myself out there with new people but something in me pushed me to go. I arranged childcare and opted out of a family reunion and away I went, alone. It was a 2-hour drive to get to Kelowna and the whole drive my heart was racing with nerves thinking “I’m so out of my league, why am I doing this?”

I arrived at the rink with over an hour to spare and watched one of the other teams with my heart racing still and feelings of uncertainty and doubt in myself. After running into a few girls I knew I felt a little more at ease but as I made my way to the dressing room with weak knees and a racing heart I was so nervous as to what would greet me on the other side of that door.

To my surprise everyone seemed just as anxious and nervous as I was. We were a group of hockey loving women of different backgrounds and skill levels coming together to support a common cause. What had I been so worried about?

As we began to create lines and I blurted out “I’ll play center” doubt still crept into my mind. I have never been taught to play center, I just chase the puck and hope for the best. After a few shifts Dani, one of the guest coaches, said something constructively to me that changed the way I played the rest of the game. At the end of the game when they called my name for ‘Player of the Game’ I was blown away. “Maybe I am good enough to be here” were my thoughts. 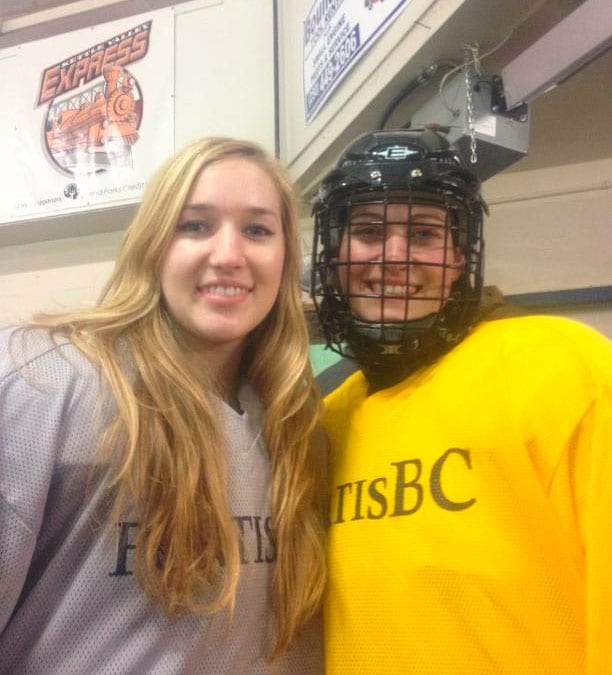 The next day I felt like a new person! I scored a couple goals, got an assist and player of the game again. What a boost in confidence!

My favorite memory from the tourney was back checking as fast as I could and getting the puck away from one of the guest coaches, and she said “Whoa, nice back check.” This tournament brought out that feisty little tomboy in me and helped me to realize I do belong on the ice and hockey isn’t just a place to forget the daily stresses, it is the core of who I am. When I step out on that ice “I am Sarah”. I am not Mom, wife, friend, or daughter, I am just me. Sarah, that feisty little tomboy all grown up, being a girl AND playing hockey.

My hope for all females in the future of hockey is to never feel like they are not good enough or don’t belong no matter their age or skill level. If you love the game of hockey then you belong on the ice and you deserve to be lifted up and supported by other females in this sport.

Thank you to the Grindstone Foundation, Sash, Danielle and Allison, for your vision and for this amazing opportunity not just to support girls in hockey financially but to also give women and girls a sense of security and belonging to this wonderful female hockey community. You’ve helped me find another piece to the puzzle of my soul and for that I am very grateful!

Grindstone Awardhttps://grindstoneaward.ca
The Grindstone Award Foundation is a charity that enables young female players to participate and improve their skill development in the sport of hockey.
Previous Post
Grindstone Charity Weekend: A Success to Repeat
Next Post
Rolling out the Red Carpet