We aimed big and we scored big! 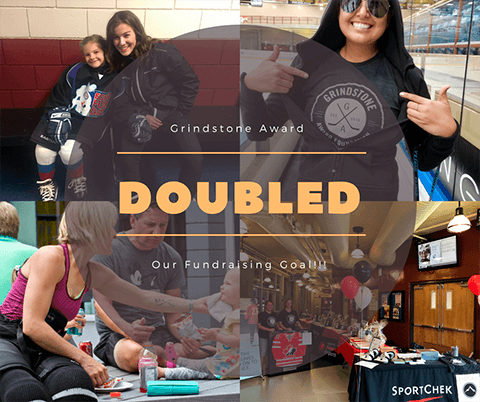 A year of planning all came together in the grand culmination of the 1st Annual Grindstone Charity Weekend in West Kelowna, BC. We DOUBLED our fundraising goal and raised over $10,000 to support young girls’ dreams of playing hockey in the upcoming season. Ever player, auction item bought, burger eaten, t-shirt purchased contributed to this success. We are deeply moved with these unbelievable results and overall success of the weekend.

This year applications were opened on a national scale and we are overwhelmed by the number of applications we have received. This highlights the importance and the direct impact the Grindstone Award Foundation can have across the country.

For three days – from July 21 to 23 – the Royal LePage arena was THE place to be for female hockey players, their friends and family. The ground-breaking event brought together over 180 players for the Women’s Charity Tournament and Girls Rock the Rink, 40 volunteers, and several guest coaches.

The idea of the event began with the desire to offer more young girls the opportunity to receive the Grindstone grant to buy hockey gear and cover other expenses related to the sport.

Fast forward a year and for three straight days we saw nothing but smiles, sweat, and excitement coming from women and girls that took part in our very first Women’s Charity Hockey Tournament and Girls Rock the Rink event. Everywhere we looked, we saw players, parents, and guests sharing our dream of growing female hockey.

It was fantastic to be immersed within the community of so many women and girls from Canada and the U.S – all sharing the passion to empower females to fulfill their hockey dreams.

How do you sum up an event that has no precedent? 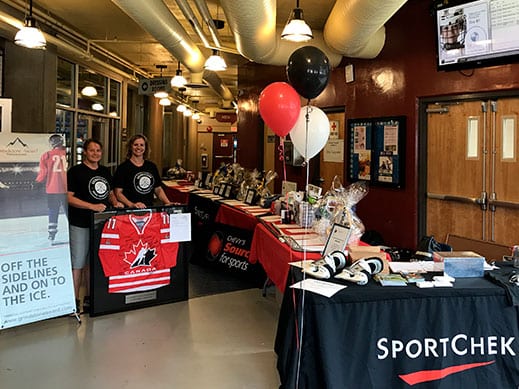 “I’m so happy to be able to give back to the sport I love,” was one of the most common phrases heard throughout the tournament. “I can’t believe this is actually happening,” was a close second.

The bright colors of Grindstone tournament jerseys lit the ice as the eight teams stepped on ice, great passes and goals echoed in the arena, and cheers and posters of Girls Rock the Rink participants raised the spirits of players and viewers.

Young girls hit the ice for the first time on Saturday as part of the Girls Rock the Rink feature. Their jerseys were hanging to their ankles and their steps on ice were clumsy; they fell, got up, fell again, and kept going. If ever in need of inspiration to not give up, grab a blanket and a cup of warm drink, find a cozy spot in the stands, and watch the younglings play.

If that wasn’t enough, a stack of notable guest coaches played besides the participants, joined the teams on the benches, demonstrated their skills, and even skated around the ice in costume. All just to make this a weekend to remember.

Even after a long 12-hour day, over 100 people attended our Saturday night event at the XChange, where we laughed, cried, and bid on auction items in celebration of the tournament. All that while enjoying the great food and drinks prepared by the staff (cucumber beverages and homemade ketchup anyone?).

Ready for next year

OUR weekend was a tremendous success that many will remember for a long time and we intend to repeat it next year.

We want to fill the arena with powerful and inspirational women and girls, we want to see them step on ice with confidence, bend their sticks, shoot the pucks, and cheer for each other.

For those who didn’t make it this year and those who can’t get enough of female hockey, be sure to keep your eyes and ears open for our next year’s plan.

Grindstone Awardhttps://grindstoneaward.ca
The Grindstone Award Foundation is a charity that enables young female players to participate and improve their skill development in the sport of hockey.
Previous Post
KOOTENAY/OKANAGAN WOMEN’S DEVELOPMENT CAMP
Next Post
WHAT DOES HOCKEY MEAN TO YOU? By Sarah Geen
Menu