We are excited to welcome Candice Moxley, a.k.a. Mox, to the Grindstone Foundation Team. Her desire and tireless efforts to help female hockey grow are evident in her personal and professional success as a player and coach. Mox is a passionate advocate for female hockey and current serves as the Assistant Coach for Markham Thunder in the Canadian Women’s Hockey League (CWHL).

“After participating in the Grindstone Inaugural Tournament weekend it was obvious to me that this was something I wanted to be a part of.” 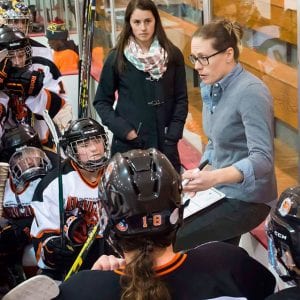 “After participating in the Grindstone Inaugural Tournament weekend it was obvious to me that this was something I wanted to be a part of. The positive energy and the feedback after speaking with some players just made me all the more excited to help.”

After finishing up her playing career at Niagara University Mox played 3 years in what is now known as the CWHL. From there went on to serve as an Assistant Coach at Robert Morris University, The Ohio State University and most recently Head Coach at Buffalo State College.

At Buffalo State Women’s Division III hockey team, Moxley led the Buffalo State Bengals to the Eastern College Athletic Conference (ECAC) West playoffs and helping the team earn its first post-season victory. In 2015-2016 season Mox was recognized for her and her team efforts as ECAC West Coach of the Year. Last season the Bengals reached the top-10 national ranking in the 2016-17 season, a stark contrast from how the program was doing in previous years.

On top of her achievements in hockey, Mox has also completed a bachelor’s degree in business commerce a degree in professional studies and two master’s degrees – one in Business Administration and another in Instructional Leadership.

As our charity expands its reach across the country, we welcome Mox and her expertise to accompany this growth. We’re looking forward to establishing a broader network of connections and support via social media and promote female hockey on a whole new national level.