Mikayala Altenburg imagined not being able to afford the necessities to be able to play hockey.

She then thought about how the past 13 years would have been if she didn’t spend time with her teammates on the ice and couldn’t imagine her life without hockey. 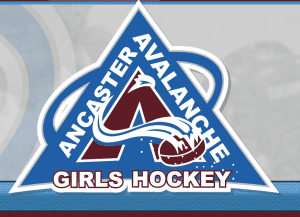 Along with the rest of the leadership group on the Ancaster Avalanche Midget A team (in Ontario), she was tasked with finding a group to contribute the extra funds her team had leftover at the end of the season. When she came across the Grindstone Award Foundation, she knew that is where the money had to go.

“Us captains came together and pitched some ideas. When I came across the Grindstone Foundation, I explained it fully to them and said that we have played hockey our entire lives which has kept us having fun. I also explained that we have the ability to help out young girls follow their wishes of playing the sport we love and to continue growing the game,” said Altenburg, who recently turned 18.

With the majority of her Avalanche teammates having played hockey their entire lives, and spending five days a week together practicing, playing and making lifelong friendships, it was unanimous that Grindstone is where they would donate.

“I put myself into the shoes of families that don’t have the money for sports and imagine not being able to afford all the necessities for hockey.

“I put myself into the shoes of families that don’t have the money for sports and imagine not being able to afford all the necessities for hockey. Not being able to play this sport would’ve changed my life drastically. The thought of helping young girls play the sport that has made me who I am, that has made me enjoy the last 13 years of my life, makes me extremely happy because I know how much hockey could impact their lives for the better,” said Altenburg.

As it turns out, the Avalanche aren’t the only team with giving back on their minds. 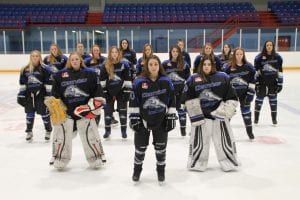 The Clearview IceCats first heard about the Grindstone when an article was written in a local newspaper in memoriam of Mike Shields, President and a volunteer of over 20 years with the Central York Girls Hockey Association in Aurora, Ont.

Patricia Albert, had read the story and how following Shield’s death in 2017 a group of players who he left an impact with over their hockey careers wanted to raise funds in support of his legacy to helping create a positive future for female hockey players across Canada. In Shield’s name, they gave a donation to the Grindstone Foundation.

“I googled the Grindstone Foundation and was very impressed by what they do,”said Albert, who is the manager of the IceCats. “We had money left over at the end of the season so I suggested to some of the team parents that we make a donation to your organization, which everyone thought was a perfect fit.” 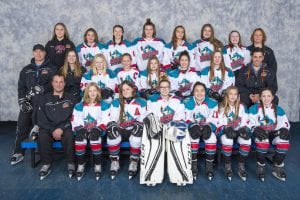 As the Grindstone Foundation continues to make an impact on young girls across the country, word continues to spread of how teams and individuals can give back. The Kelowna Rockets (in B.C.) Bantam Female Rec team also has taken the initiative to donate to the game they love. They chose to donate the proceeds from the Alley’s Angels Tournament of Hearts to Grindstone.

“Word of the foundation is spreading fast and it is certainly a fantastic cause so we are happy to be able to do this,” said Leanne Foster, team manager. “Plus, your ambassador Camille Arellano is a part of our team so it is even more close to our hearts.”

The Grindstone is on track to increase the amount of bursaries they gave out last year, 10, to 30 for the upcoming season thanks to the donations from teams like these and individuals who have had their lives touched by hockey.

The Charity is now accepting grant applications (until Aug. 1) for those needing financial support. The Grindstone provides bursaries to female players across Canada under the age of 19 who have a desire to pursue their goals in the sport of hockey. Funding is provided on a basis of financial need and desire, not on hockey ability. Recipients will be selected from applications based on an objective and nondiscriminatory basis.

Grindstone Awardhttps://grindstoneaward.ca
The Grindstone Award Foundation is a charity that enables young female players to participate and improve their skill development in the sport of hockey.
Previous Post
EXCITING ANNOUNCEMENT!
Next Post
A Charity Weekend to Remember