A Charity Weekend to Remember

Let’s do the math.

A year in the making, countless hours of brainstorming and planning, and numerous inspirational moments and people. This adds up to one weekend of three amazing and fun-filled days, 140 women, 90 kids, 25 coaches, 40+ volunteers, plus parents and friends.

The Grindstone Award Foundation received a total of 169 grant applications from across Canada, every province and territory (except for three!). Thanks to generous donations and fundraising, the Foundation reached the goal of supporting 30 young female hockey players in the upcoming season. 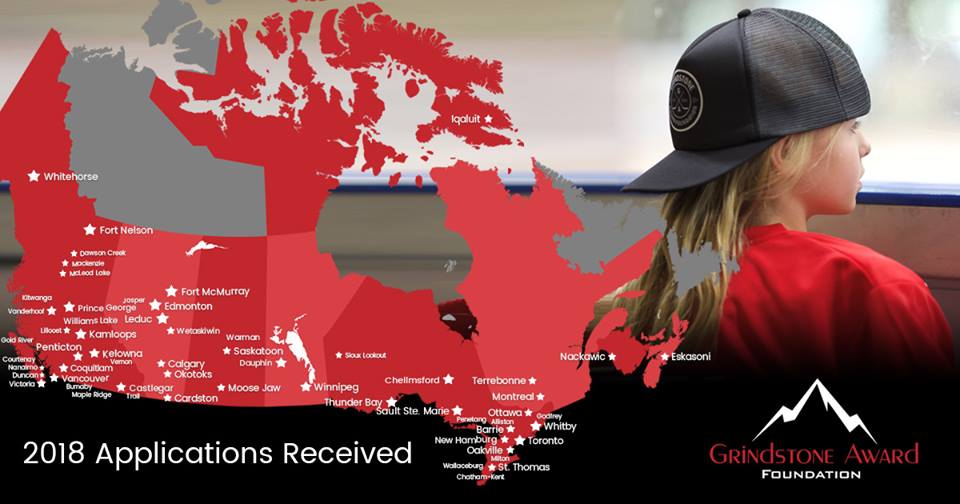 To all those who played, volunteered, donated, and attended our 2nd Annual Grindstone Charity Tournament and Girls Rock The Rink/Esso Fun Day—you made this an event to remember.

Our neon yellow squad of volunteers were hard to miss. Unlike their animated counterparts, the Grindstone minions came together for a more admirable cause.

They made sure the participants had to only worry about having fun, they collected stories that told a tale of overcoming adversities, and they soaked in the many faces of happiness, finding inspiration to keep on going through the long days.

It might be safe to say that any female hockey player has looked in the mirror wearing full gear and felt powerful.

But have you ever thought of yourself as a warrior heading into battle?

The junior coach and grant recipient Meadow Arcand-Squakin got into hockey when she saw her cousin play. “With all his gear on, he looked like a warrior and I wanted to do that too,” she shared at the tournament. Years have passed since that moment and she is now a great hockey warrior and an inspiring role model to the young players she coached on Saturday.

To all the female warriors out there, keep that fierce look on your face and keep on hitting the ice with a determination that can move mountains. After all, you never know who is watching.

Be it Hayley Wickenheiser or Natalie Spooner, our hockey heroes shape our lives. But we don’t always have to look too far for inspiration. Katie Olfert, a 10-year-old goalie attending the Girls Rock The Rink/Esso Fun Day, looked to her family to find encouragement to keep on going.  With her mom, dad, and brother all playing hockey, she continuously learns to not give up.

What would Katie say to any young girl doubting her skills? “I want to show them that if they have the mindset to play hockey, then they can play hockey.”

The charity weekend also marked an important moment for the mothers and daughters playing together. Our last year’s power duo, Darcie and Ashlyn Sunderman, were back for another round of games. Stephanie Wilde was joined by her daughter Sophie on ice, summarizing their experience under the caption, “Only a tournament like this affords us the opportunity to play together. So thankful!”

After being in the charity business for a bit over a couple years, a pattern has appeared—the Grindstone Inspiration Cycle.

Step 1: We break barriers and put together a one-of-a-kind event with the single purpose to support the growth of female hockey.

Step 2. Someone comes to the event, sees the collaboration, the opportunities and hopes, and gets inspired.

Step 3. That someone goes out there to make a change themselves, heading back to Step 1 and beginning the cycle all over.

We all have it in us to make a change. Everyone out there can be a Changemaker.

Mel Talaro was a player at the 1st Grindstone Charity Tournament and was inspired to host a spring hockey event in Whistler, with all funds going towards supporting Grindstone. She fundraised a whopping $10,000 during the event, enabling more young female players to receive a grant this year.

As shown by the 7-year-old Anna, who “wants all girls to be able to play hockey because hockey is fun,” changemakers come in all ages. Anna and her little sister Elsie, with the help of mom Sandra, decided to take it upon themselves to do a bottle drive and fundraise over $300 to donate to the Grindstone.

Speak Up And Make A Difference

The banquet speeches were the perfect grant finale for the charity event.

Our Grindstone ambassador Camille touched on the subject of bullying. She shared her journey of finding courage to fight the bullies (but not literally!) with the support and advice of fellow hockey players. We heard of Grindstone growing and partnering with CWHL, and we heard of the charity’s unlimited future opportunities.

We are breaking the ground into something new and untapped, discovering with every event and every social media share how vast and exciting the land of female hockey is.

Don’t be afraid to use your voice to help us grow the sport.

A simple act of speaking up, showing up, and kicking ass on ice makes all the difference.