Toronto Furies Grindstone Fundraiser will leave a lifetime of memories.

A one day skills session fundraiser hosted by the Toronto Furies for the Grindstone Foundation Award will leave a lifetime of memories for young female hockey players.

Over 45 kids from the ages of 8 to 17 hit the ice with the Canadian Women’s Hockey League team on March 3 to learn from the Furies players in a fun skills session and chalk talk event.

“Hearing these girls say it was their ‘best day ever’ is really a great reminder of why the Grindstone does this.”

While it was a day to remember for the kids on the ice, the funds raised will ensure girls across the country will be able to create their own hockey memories. We are pleased to announce almost $2800 was raised from this successful event! 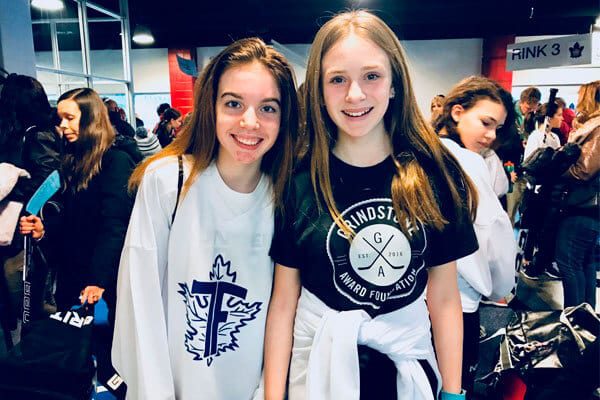 “Hearing these girls say it was their ‘best day ever’ is really a great reminder of why the Grindstone does this. Now we are able to use the funds that were raised from this great event that the Toronto Furies hosted to give out more bursaries to girls who would not be able to handle the financial burden to play hockey. We are getting those girls on the ice so they can have their best day ever too,” said Grindstone’s President, Danielle Grundy. This was a first for the Grindstone Award Foundation; to have the opportunity to partner with a team competing at the highest level in Canada – the CWHL. Grundy hopes to continue to build off of this event and create more similar events in the future with the Furies again and other CWHL teams to grow the game.

The Furies offered their support to the Grindstone Award Foundation to assist in the growth of the grassroots of the game and continue to create a future for the sport of women’s hockey. 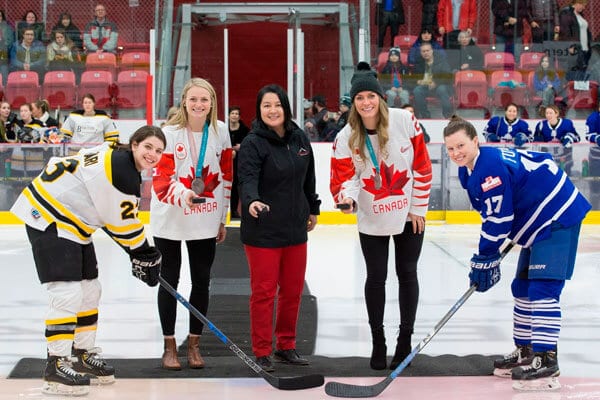 “It is amazing to see these little girls faces light up when they are on the ice. It is the reason we are proud to team up with the Grindstone Award Foundation to give more kids exposure to the game that all of us with the Toronto Furies love,” said Nicole Latreille, General Manager of the Toronto Furies.

The one hour on-ice skills clinic and chalk talk with the Toronto Furies also included a ticket to the Furies versus Boston Blades game that evening where Canadian Olympian’s Natalie Spooner and Renata Fast dropped the puck with Grundy.

For Furies defenceman Katie Gaskin, the smiles on the young girls faces is what hit her the most.

“I remember growing up I was sometimes the only girl in camps, it was all guys, which was fine but having a program like this where all the girls can be together and just working on things together and just really lifting each other up and giving each other confidence is just such a huge thing. It definitely is a big growth for women’s hockey and girls up and coming,”

Furies forward Shannon Stewart said she was proud to be able to offer her time to the kids and the foundation. 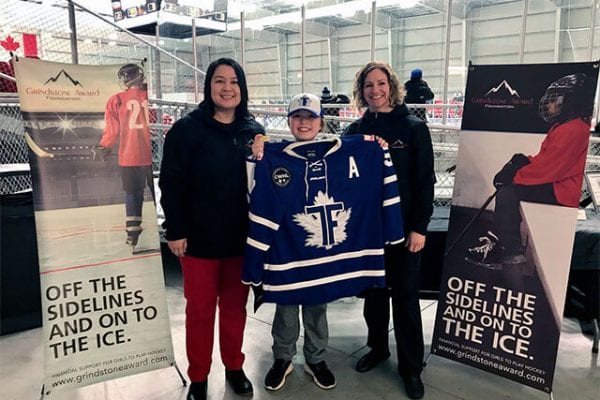 “Hockey is not a cheap game and I think a lot of parents are trying to decide if they want their kid to go into hockey because of how expense it is, so it is awesome that (Grindstone) helps them out.”

The Grindstone Award Foundation now is looking forward to another fundraising event in Whistler, BC in May. The tournament will also feature a special try hockey for free event, on May 5, that is open to girls and women of all ages.

Later this summer, the Grindstone will host their 2nd Annual Charity Weekend from July 20-22, where they invite female hockey players of all ages to join them in Kelowna for a fun weekend on the ice.

Those interested in donating or becoming a sponsor for the Grindstone Award Foundation can contact the foundation by email at [email protected] or by calling 250-863-2433.

Grindstone Awardhttps://grindstoneaward.ca
The Grindstone Award Foundation is a charity that enables young female players to participate and improve their skill development in the sport of hockey.
Previous Post
Giving kids a chance to live her hockey dream
Next Post
The Inspirational Moment Behind An Amazing Tournament
Menu