A donation was made to the Grindstone Award Foundation by some hardcore female hockey players in the name of Mike Shields, former President (“El Presidente”, as he would say) of the Central York Girls Hockey Association. Mike’s life ended much too young on August 23rd, 2017, but his impact on the CYGHA, the OWHA, and all the players he came into contact with over his 20+ years of volunteering will not be

forgotten. Mike was a passionate person who had a multitude of interests, a main one being Women’s Hockey. He was a great advocate for women in sport, and wanted every girl to get the chance to play…this is why his daughter’s friends chose the Grindstone Award Foundation to donate to in his memory.

“He strived to make every player feel supported, and went out of his way to make each season memorable.” 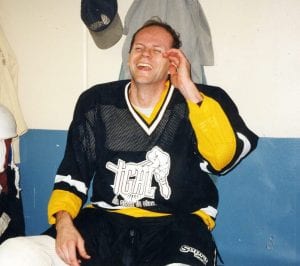 In his early years of volunteering at the CYGHA, Mike could be found puttering around the rink much more than your average volunteer. He somehow found a way to play his music during special games, and inadvertently (or perhaps very much intentionally) created a legion of Atom girls who loved grunge. He always seemed to be sending emails after midnight, questioning moves that he didn’t think benefited the girls, and yelling the ‘F’ word…fun!

As he moved to the executive table, he made sure house-league teams were treated the same as rep teams, supported and championed the DS program, worked with teams internationally to provide unique tournament experiences for all girls, and of course gave his colourful play by play whenever he could get his hands on a microphone. He was very much in it for the girls. He strived to make every player feel supported, and went out of his way to make each season memorable.

“He brightened long meetings with his big laugh and endless witty repertoire.” 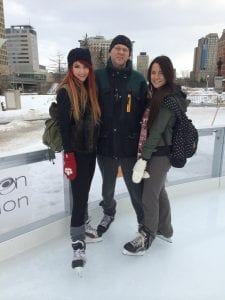 When he started working with international teams, he implemented a ‘live stream’ so family members at home could watch their house-league superstars play. When house-league championship games rolled around, he would collect information about all players (ranging from favourite band, to hockey idol), and find a way to drop those personalized snippets of information into his broadcast. He implemented the ‘Queen of the House’ tournament, where champion house-league teams from neighbouring associations would come together to see who was ‘the fairest of them all’. He went out of his way to make sure the house-league girls felt as important as those in rep, all the while with the focus being on that dreaded ‘F’ word again…fun.

After his death, there was an outpouring of messages from girls he had coached, or simply come into contact with during his time in the rinks. Girls who all shared the same message of how he made their time playing hockey better. How he made it more fun. How he made them feel like an important member of their team, and like someone was supporting them every step of their hockey journey – whatever it might have looked like. It seems only fitting that maybe one more girl can play the game he loved so much in his honour, and feel the same way.