I saw them first on the ice, in full gear, switching from laughing to being serious. I didn’t need to glance twice. They were in their element!

Darcie Sunderman and her daughter Ashlyn lent their faces and passion for hockey to help tell the story of Grindstone and women’s hockey. Open the charity’s website and you’ll see Ashlyn’s green eyes advocating for why female hockey matters. Look back at the 2nd Annual Charity Tournament and Darcie’s radiant smile reflects why so many women participate in the events.

This is the story of Darcie and Ashlyn: A powerful and inspirational mother-daughter team from Kamloops, BC.

The Love for Hockey and Grindstone

Darcie first met Danielle, the President of Grindstone, years ago playing hockey and they became good friends. When she heard about the idea to create Grindstone, Darcie offered to help wherever needed.

And even though Ashlyn had no idea what Grindstone was until her mom had signed her up to play at the 1st Charity Tournament, she has since embraced the annual event, the Foundation and what it stands for.

So when the time came to find a mother-daughter team to come out to the photoshoot during the 1st Charity Tournament, there was no doubt who to ask.

“We were both humbled and honoured to be asked to help out and I love that I have these professional photos and great memories from it,” remembers Darcie. Ashlyn adds that it was hard to stare each other down without laughing.

Darcie has always been interested in hockey. Her parents wouldn’t let her play so she ended up figure skating for 10 years. “I got tired of watching,” shares Darcie about her finally starting to play hockey when she was 30.

Ashlyn has been on skates since she was three years old. She has been surrounded by hockey players in her family her entire life, so playing the game was just a natural progression for her. “My whole family plays hockey including uncles and god-families, some even playing pro. As long as I can remember hockey has been a part of my family.”

“What has changed for me as a parent since Ashlyn started playing? Other than owning shares in hotels and Tim Hortons?,” laughs Darcie.

When asked about their favourite thing about hockey, the answer is unanimous.

“The community. The people. The speed. The adrenalin.”

As an only child, Ashlyn also finds that being on a team really makes one feel like they have brothers and sisters. The team and community become a little family that would give anything for one another.

“My favorite thing about hockey is the passion it brings out of people and how it can bring people together. Hockey was a savior for me. It has helped me get through a lot of very troubling times. I honestly don’t know where I’d be if I hadn’t started playing,” shares Darcie.

Ashlyn struggled with being bullied both in school and hockey when she played with the boys. For her, hockey has become a way of letting off steam, gain confidence, and meet new friends. As Ashlyn got older, hockey also helped her deal with anxiety and depression.

“When you step on the ice nothing else matters and the world goes quiet for a while.”

“It’s very frustrating as a parent. It breaks your heart when you see your child holding themselves back because of others. We just kept encouraging Ash to play her best, keep her dreams important and to stand up to them. She did and also gained the confidence to play rep hockey for the Kamloops Bantam and Rep girls teams.”

The biggest change Darcie has noticed in Ashlyn is her confidence. But Ashlyn has also learned proper eating, how to train, discipline and mental focus.

With the lessons Ashlyn has learned in hockey and the confidence she’s gained, she’d consider becoming a coach. She has already coached a little bit with the Future Stars camps alongside Marie-Philip Poulin and Jillian Aps, as well as other camps and the Peter Puck program in Kamloops.

“I would teach girls to be confident on and off the ice and to become genuine kind people,” says Ashlyn.

When Darcie sees Ashlyn play hockey she feels unbelievable pride. Darcie loves to watch Ashlyn play just as much as she loves playing with her, be it on the same or opposite team.

“She inspires me every shift. I still see her as a little atom or pre-novice sometimes but then she blows by me and makes an awesome play. She makes me want to be a better player every game,” says Darcie.

“It’s hockey. She isn’t really my mom on the ice and I usually tell her to stop mom-ing me,” adds Ashlyn. “She’s just another teammate for me, as I am to her.”

Ashlyn usually coaches her mom in her head and sometimes it comes out. “We kind of help each other, because we see more sitting on the bench than we might see on the ice.”

As for other young players who might play with or against their moms one day, Ashlyn has one advice, “Just do it. Even if you think it’s lame or embarrassing it makes so many memories and you aren’t going to have that opportunity forever.”

Let’s Help Each Other Grow

Darcie easily finds words of encouragement for Ashlyn and other girls who wish to play hockey.

“Never give up. You will be tested and challenged on and off the ice but stay true to who you are. Hard work beats talent when talent doesn’t work. Be humble and kind but be proud of yourself. Learn from your challenges and move on, don’t drag a loss or bad game around with you. Lift your teammates up and set a strong positive example. And don’t forget to enjoy every minute of the journey.”

Ashlyn shares that the best advice she was given was to be coachable, be positive, and be happy even if you’re nervous. Coaches will always choose a positive kid ready to learn and improve instead of the stuck-up hot shot that thinks she knows everything.

She also reminds to be kind to everyone, help your teammates even if you’re in tryouts and fighting for a spot. Coaches see more than you think.

Ashlyn shares that there are times when one will have to step up for what they believe, even if it means to tell off a coach.

Ashlyn was never the best player and had a lot of ice time cut for being a girl. The frustration that she couldn’t improve her game came to a boiling point when a coach told her he didn’t want Ashlyn on the ice during a rough game to prevent her from being hurt. She said to him, “That’s bullshit!” and he let her have one shift.

Within 30 seconds on ice she dropped the other team’s biggest players and got an assist. At the end of the year she got the “Gutsy Girl” award for not being scared. She threw it in the garbage, set her mind on taking hockey seriously, and practiced to become better.

She was cut from U-16 two years in a row, but kept practicing. Three years later Ashlyn tried out for the Thompson Okanagan Lakers and made it. At the end of her final minor hockey season with the team, she was contacted by the coach for Arizona State University and was offered a spot on the team for the 2018/19 season.

Ashlyn enjoyed the experience at the university studying psychology and behavioural science, and playing for the Arizona State Sun Devils. Unfortunately the hockey program was very new and not what she was hoping for or expecting. Losses within the family also made it difficult to be away, so after the first semester she decided to return home.

Her biggest takeaway was how much independence and courage it took to go alone, live alone and start from scratch. It also took a lot of discipline to get herself out of bed at 7 a.m. for practices and to eat and drink well.

And now, with her own baby arriving in the summer of 2019, Ashlyn shares her words of encouragement with other young female players and their parents.

“I guess my point of the story is that it isn’t too late. It doesn’t matter if you’re not at the top now, there is always time to get there but you have to work for it. No one will hand it to you, but when you get there it is the best feeling in the world. Don’t take NO for an answer.”

The Future of Female Hockey

Neither Darcie, nor Ashlyn feel that hockey is mostly for males anymore. They’ve seen female hockey grow fast in the last few years and become popular among female players of all ages.

Ashlyn adds that she thinks some people assume that women can’t keep up with the male players, so it’s a great feeling to challenge that view. 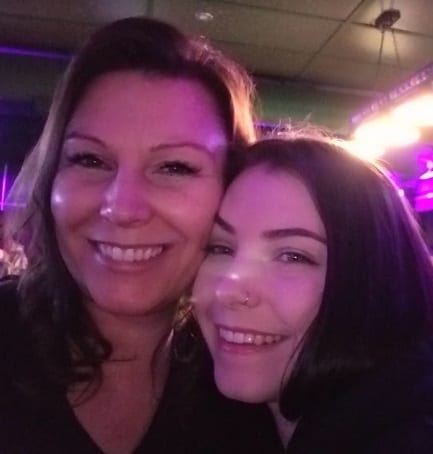 As a kind reminder, Darcie has a powerful message she’d like to share with the hockey community.

“To the parents. Support your daughters all the time. Let them progress at their own time. Don’t bribe or threaten them to motivate them to get you goals. I see it a lot and it isn’t fair. They need to play because they love it, not to please you. Hockey should be fun and positive.

To the girls. Anything is possible. Always play your best. Be coachable!!! Hockey isn’t always about scholarships. Enjoy every moment, the friendships and the memories.”