Olympian’s Sticks in for Charity Tournament Donates to Grindstone 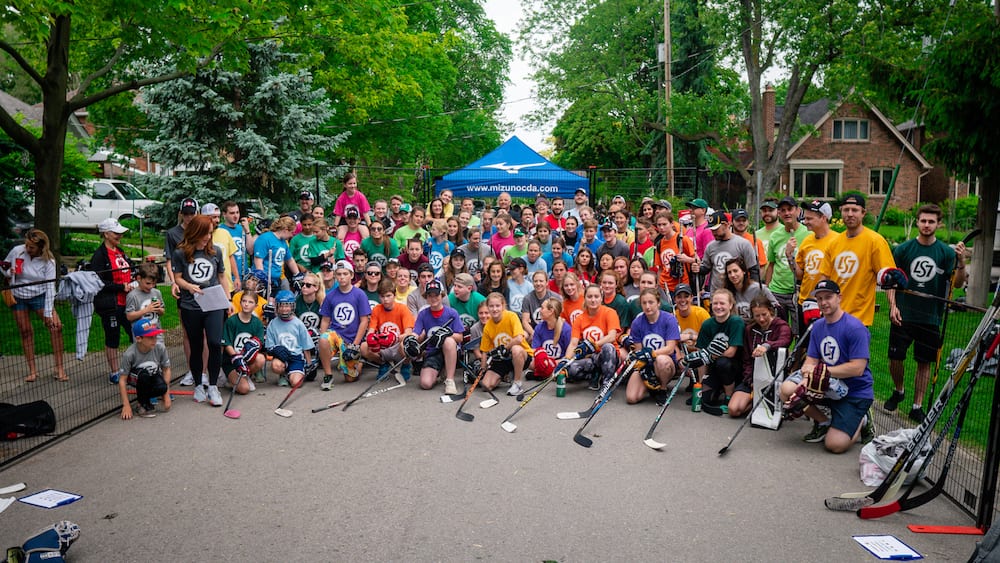 After being enrolled in a learn-to-skate, figure skating class when she was younger, Laura Stacey always knew that she wanted to play hockey.

She would see little boys running to the rink across the street with hockey sticks in their hands and yearn to be a part of the sport.

“I just sat and cried because I thought that they were having so much fun,” Stacey said. “I thought I want to be over there and my parents, for a long time, were insistent on learning how to skate first.”

Despite initial pushback from her parents, Stacey’s passion and determination eventually convinced them to let her play, leading up to her earning a silver medal at the PyeongChang 2018 Olympic Winter Games.

Two decades later, and only a few months after the gold medal match, Stacey and her sister went outside on a beautiful day in May, brought out a net, and wanted to start a little game of street hockey. They didn’t think much of it at first, but what originally was a way to celebrate Laura’s birthday turned into something big.

“I know there are a lot of people out there who can’t [afford to play hockey] and I think giving people the opportunity to play, be active, and enjoy that lifestyle is something that I really really want to support, which is why Grindstone is an important charity.”
–Laura Stacey

“We put some nets out, and all of a sudden, so many other neighbours came out and were asking to play,” she said. “Our game then got pretty big and was competitive and fun.”

Instead of running a conventional hockey camp, Stacey was inspired by what had transpired in her own neighbourhood. Her sister’s boyfriend asked, “Why don’t you put on a charity road hockey tournament?” and she was sold. Less than two months later, Stacey and her family put the whole tournament together, forming the first-ever LS7 Sticks in for Charity Road Hockey Tournament.

“It was honestly one of my favourite weekends of the summer. It was super rewarding and a ton of fun, so now I want to keep it going for the rest of the year and give back to not only the community but the sport that’s done so much for me,” Stacey said.

What makes the tournament so special is that everybody with different skill sets and abilities can participate and be placed on teams with Olympians, CWHL/NWHL players and Team Canada athletes.

“I think I’ve been to a lot of hockey tournaments or charity tournaments where people make teams and the young kids don’t have that much fun playing the older teams who tend to dominate. Obviously, I’m competitive, but I just thought I’d like a little kid to get the chance to play with some of their role models.”

On top of donating the proceeds from the event to local schools in the neighbourhood to create an activity day and promote healthy living among children, Stacey is also donating a portion of funds raised to the Grindstone Award Foundation.

“[The event] started from the idea of being outside being with your friends, so I wanted to choose the perfect charity that can support that and young girls or females the opportunity to play hockey. That’s obviously really special to me. I was fortunate enough that my parents could enroll me in hockey and I had that privilege my entire life.

“But I know there are a lot of people out there who can’t and I think giving people the opportunity to play, be active, and enjoy that lifestyle is something that I really really want to support, which is why Grindstone is an important charity.”

Her second favourite part of it all? Seeing people show up to her games with one of the game jerseys or T-shirts with her logo on it. Her favourite? Seeing the impact of the charity event and watching the tournament grow year by year.

“I’m excited to see where I can go,” Stacey said. “I do hope that as professional athletes, we have the ability to inspire or at least show young girls and boys what it is like to dream, and have a dream, and go after it.”

LauraStacey7: “About 1 month ago we threw our sticks in and raised over $10,000 at the second annual LS7 Sticks In For Charity Tournament!!! Can’t wait to see the smiles on the little boys and little girls faces who may now have the chance to chase after their dreams and participate in #sports. Especially the recipients of @GrindstoneAward who will now be able to share our passion for #hockey!”

Laura will be donating $6,000 from her charity tournament to Grindstone! We couldn’t be more grateful for her support!