The small town of Ladysmith on Vancouver Island has more to offer than its island community charm and rich history. It’s also home to an exceptional young Metis woman.

Jada Livingston is our 2018 Grant Recipient and Grindstone’s newest Ambassador. She has been playing hockey for over five years, she is an honour student, and has an inspiring story to share.

Growing Up In Ladysmith

For Jada, Ladysmith was the usual small town community with friends at every second house on her street, rustic buildings, and amazing mom and pop shops. 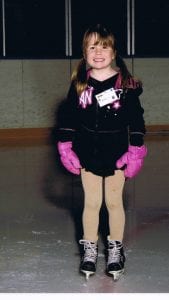 She was fortunate to start playing hockey at a young age and remembers vividly heading to the rink for her first tryout.

Growing up, the best nights were the ones where she got a knock on the door after supper from one of the kids asking her to play road hockey.

“Growing up in Ladysmith was one of the best things that’s helped me shape who I am today,” says Jada.

Jada credits her parents for everything they did in her childhood to get her where she is at today. Her Mom and Dad have worked hard to help Jada and her brother Hunter achieve their academic and life goals. And when needed, their grandparents have helped out as well.

“The way my parents are putting money into my brother and I, truly shows that they want what’s best for us, and I eventually want them to retire knowing they did all they could so we can reach our highest potential.”

To help cover her hockey costs and pay for her gear, Jada applies for bursaries and other financial aid, and applies for summer jobs when she’s off school.

Throughout her schooling in Ladysmith, Jada had the nagging feeling of wanting more for her education and future. Her Dad and Uncle are alumnis of Notre Dame, and her brother Hunter began to attend the school in Grade 10.

Jada, one of the Hounds

The smaller class sizes, amazing morals and teachers, and a motto that inspires success—Luctor et Emergo—convinced her the school was right for her.

“I take great pride in calling myself a Hound,” she shares.

Jada finds studying at Notre Dame to be a lot different than the average high school.

She sees more respect for every individual, and she values that teachers have expectations for every single student attending the school. Notre Dame feels like one big family where everyone shares the same goals in life and want what’s best for them.

Ever since they were young, Jada and her brother Hunter have been inseparable. Hunter was the person that not only introduced her to playing hockey but also taught her the love for the game.

“My brother took me aside and said, “Look, the first time you are going to get on the ice guys are going to tell you to get off, but don’t let that stop you.” Ever since then he has been my motivation to keep getting better.”

To this day, Hunter is the first person she calls after she scores a goal or has played a great game.

Jada’s parents have also greatly impacted her life. When she first started playing, she was placed on a rep team. She was so bad the league wanted to keep Jada back a year but her Dad said no.

Her Mom would make dinners in advance so they could have a meal after school, then race off to practice. For the first few years of hockey, Jada’s parents drove her to the rink 45 minutes away so she could make it to her 6am practice.

As for herself, being a part of the Metis youth, Jada wants to become a better ambassador for them and show that there are no limitations on what one can and can’t do in sports. She hopes to show them that anything’s possible.

“I want to tell my story and help them understand that you can do anything. Our stories and backgrounds may not be the same but deep down we are all one big family in the world of sport.”

Because of Jada’s dedication and persistent positive attitude, hockey has given her many opportunities she hopes will inspire others. She represented Team BC at the National Aboriginal Hockey Championships and that opportunity led to her getting selected to play on the APTN’s TV show Hit the Ice.

Jada always aims to be the best person she can be. Her dreams and athletic goals come at a high cost, both financially and when it comes to finding the motivation, dedication and persistence to keep going.

She wants to be a leader on and off ice. She wants to be the person in the dressing room that anyone can approach. After she finishes a game or practice, Jada wants to be able to look in the mirror and tell herself she had nothing else to give.

“Every time I step on the ice with my last name pasted on my jersey I want to wear it with pride and represent my family.”

One of Jada’s larger goals is to attend more recognition camps and receive a post-secondary athletic scholarship to play higher level hockey. As with many female athletes, she wants to represent Canada on day, and she’s willing to take the little steps and overcome the big obstacles to get there.

There’s No Room For Stereotypes

Hockey is Jada’s escape. Whenever she steps on ice for a practice or game, it’s go-time. 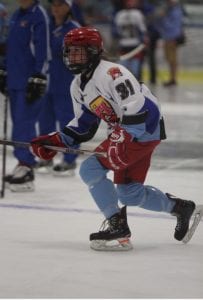 Jada: A force to be reckoned with

“It’s the best feeling to play the sport you love alongside seventeen other females who are in the same boat,” she says.

When Jada first started playing hockey, she was doubted. She was the only female playing on a male team and she showed the other players and parents that she was there for a reason and deserved all the ice time she got.

“The stereotypes put in place for female hockey players is one us females have to overcome. We need to prove to our society that we are the new generation and we will not back down from any competition. We are the next part of the hockey world.”

Jada hopes to always stay involved in hockey as a player and mentor.

For any young female who feels insecure about trying hockey or her abilities on ice, Jada has one message.

“No matter who you are, what your background is, where you live, just do it! There will be people who put you down and tell you that “girls don’t play hockey” but use that as motivation to be better and prove them wrong. Girls are amazing and we have so much to prove to this world. Be the change that this world needs and enjoy being a girl! You are amazing!”

In the summer of 2018, Jada reached out to Grindstone and asked to become an ambassador for our cause.

She transfers her leadership and mentorship skills into her vlogs, sharing insights on life in another province and her hockey pursuits.

It is thanks to young female hockey players like Jada, their families and supporters that Grindstone has had the opportunity to grow the game alongside BC Hockey, CWHL, and many female pro-athletes.

Grindstone Awardhttps://grindstoneaward.ca
The Grindstone Award Foundation is a charity that enables young female players to participate and improve their skill development in the sport of hockey.
Previous Post
Benevity: Corporate Goodness in the Heart of Okanagan
Next Post
EVENT SPOTLIGHT Skate with the Thunder
Menu